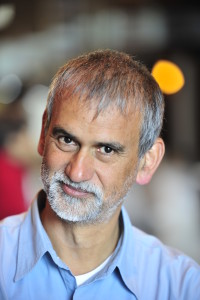 The Edita and Ira Morris Hiroshima Foundation for Peace and Culture has decided to award its prize for 2018 to Mike van Graan, a South-African born playwright and cultural activist for his contribution to the fight against apartheid, to building a post-apartheid society and to the study of the interface between peace and culture both in his home country and across the African continent. Mike van Graan has recently been a Richard von Weizsäcker Fellow at the Robert Bosch Academy in Berlin. He is also an Associate Professor of Drama at the University of Cape Town, and serves as a Technical Expert for UNESCO on the 2005 Convention on the Protection and Promotion of the Diversity of Cultural Expressions.

Having graduated from the University of Cape Town with a BA Honours Degree in Drama, Van Graan has served in leadership positions in a variety of local and continental arts and culture organisations including Director of the Community Arts Project, Projects Officer for the Congress of South African Writers, Secretary General of Arterial Network and Executive Director of the African Arts Institute. After South Africa’s first democratic elections in 1994, he was appointed as a Special Adviser to the first minister responsible for arts and culture where he played an influential role in helping to shape post-apartheid cultural policies.

He was appointed as Artscape’s Associate Playwright from 2011-2014 and is considered as one of South Africa’s leading contemporary playwrights, having garnered numerous nominations and awards for his plays that interrogate the post-apartheid South African condition. To date, he has written 29 plays with When Swallows Cry (2016), a searing work that addresses the theme of contemporary African migration and refugees and the satirical revue, State Fracture (2017) that speaks to the declines of post-apartheid South Africa with its increasing inequalities on the one hand and corruption on the other, being among the most recent.

The Hiroshima Foundation was created in 1989 following a bequest by the Swedish author Edita Morris (1902-1988) who was married to the American author Ira Morris (1903-1972). It is named after Edita Morris’ most famous novel The Flowers of Hiroshima which describes the suffering caused by the atomic bomb. Edita and Ira Morris’ son Ivan Morris (1925-1976) was professor in Japanology and one of the first interpreters sent into Hiroshima after the explosion of the bomb.

The Foundation presents awards to women and men who contribute, in a cultural field, to fostering dialogue, understanding and peace in conflict areas. The award is normally presented every second year, but intervals vary. The 2015 prize was awarded to Professor Anatoli Mikhailov, founder and rector of the European Humanities University in Vilnius, Lithuania. The 2014 prizes were given to the Canadian General and Senator Roméo Dallaire and the dancer and choreographer Kettly Noël. The 2010 prize was awarded to the British documentary filmmaker Kim Longinotto. In 2008 the award was presented to the principals of two schools in Sri Lanka in recognition of their efforts to foster mutual understanding for Tamil and Sinhalese culture. The 2006 prize was given to Elena Nemirovskaya, Director and founder of the Moscow School of Political Studies. In 2004 the prize was awarded to Borka Pavićević, founder of the Centre for Cultural Decontamination in Belgrade, with additional prizes to Biljana Srbljanović and Jasmina Tesanović, Serbian authors and peace activists. Further information on the Foundation, including a biography of Edita Morris and a full list of recipients of previous awards, can be found on the Foundation's website http://www.hiroshimafoundation.net .

In taking the decision to present Mike van Graan with the award the Board stressed both his impressive literary work, his important role in shaping and monitoring post-apartheid cultural policies and his policy, advocacy and capacity-building work in the field of culture and its contribution to development, human rights and peace in Africa. The 2018 Prize amounts to CHF 75.000. An award ceremony is foreseen to take place in Malmö. Sweden, on 8 May 2018.

2015
The Edita and Ira Morris Hiroshima Foundation for Peace and Culture has decided to award its prize for 2015 to Professor Anatoli Mikhailov, President and Founding Rector of the European Humanities University, Vilnius, Lithuania.

2014
Hiroshima Prizes to be presented to Senator Roméo Dallaire and Kettly Noël, dancer and choreographer

2008
K. V. Wimalawardana and K. Kumaraveloo
Two Principals of schools in Sri Lanka to be presented with the 2008 Hiroshima Prize in Stockholm